Another item I can post about now that it's complete and working is the HERMS.  This is probably the most over-engineered single bit of equipment in my new setup.  But I don't mean over-engineered in that it is overly technical, or difficult or even that special, just that it took so many different design-iterations and build attempts to actually make the thing.

The HERMS design/build process started with sourcing some stainless tube.  On the telephone Geordi Stainless said multiple times that they had 6m lengths of 1/2 inch/12mm thin walled (0.9mm) stainless tube in stock, unfortunately when I drove there they had sold it all and only had 1.2mm wall thickness.  In addition, full 6m lengths of tube were not so easy to get home in the car:

While it was - just - possible to bend the 1.2mm wall-thickness tube, it proved to be an absolute bitch to bend around anything (such as a 4kg CO2 bottle) to shape it into a reasonably small size:

... so that idea was abandoned.  Luckily after bitching at Geordi on the 'phone they referred me to another stainless dealer, ironically closer to home, who did have 12mm 0.9mm wall-thickness stainless tubing in stock, but unfortunately it only came in 1.2m lengths: 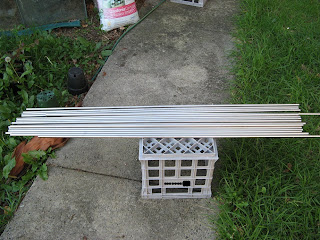 Fortunately they  had so much of the stuff, and nothing to do with it, they were happy to sell it at essentially scrap-metal prices, so it was time to get creative and see what I could come up with.

With some practice, coils were easy enough to bend with the thin-walled stainless tube:

But I was going to need to find some way to join multiple lengths of the tube together to in order to achieve enough lenght of tube for it to be an effective heat exchanger.  Some creative ideas included a double-helix:/coil:

5 lengths (approx 6m) of coil inside a corny keg:

With a couple of additional fittings and filled with ice, this might turn into a post-plate-chiller instant-lager-pitching-temperature brew day chiller.  In that case the additional volume of chilled water/ice will actually be a benifit not a disadvantage as it is with heating the water for a HERMS unit where you want a smaller volume of water to make it mroe responsive:

The next iteration of HERMS design involved using the least amount of heating-water possible, by fitting it into a kitchen-kettle.  One of the reasons I attempted this is because I was told it couldn't be done at home:

With some practice and work, the pipe-bender was able to coil the tube tight enough to fit inside a kettle, the only problem being the inlet and outlet since the coil was already as tight as it would go, it was difficult (but not impossible) to bend both up to the top which was the easiest design solution.  In addition only 2 coils could easily fit inside the kettle, since it was difficult to compress them (top to bottom) tight enough.  It could have been done but became more effort than it was worth.

While the completed HERMS did not take long to make and - in itself - was very cheap to build, all the different prototype builds did take quite some time, and effort, and pushed the end-cost up so that it was not that much cheaper than buying a pre-made coil ... and I now have a collection of reject-stainless tube: